A web hosting service on the other hand is a type of Internet hosting service that hosts websites for clients, i.e. it offers the facilities required for them to create and maintain a site and makes it accessible on the World Wide Web.

Hence; A VPS—or virtual private server—is a virtual machine that provides virtualized server resources on a physical server that is shared with other users. VPS is segmented to privacy (or dedication), giving its users an authoritative efficiency.

What is VPS hosting?

VPS hosting is a website hosting environment that allows for resources such as RAM and CPU to be dedicated to your account, achieved by virtualizing a Dedicated server and splitting the resources amongst the users on that server. VPS’s original name was RACS (remote access computing system), originally developed at McGill University in Montreal from 1966 onward.

VPS is a form of multi-tenant cloud hosting, in which virtualized server resources are made available to an end user over the internet via a cloud or hosting provider.

It is a type of hosting suited for people who desire more privacy than sharing an apartment as in ‘shared hosting, where multiple sites reside on a single web server with shared hosting and have no guarantee of resources.

VPS allows fewer users to share allocated segments of hard drive space, memory, and processor power. Each VPSs shares a hypervisor and underlying hardware, but they have access to a virtual machine running its copy of an operating system (OS) and applications and it reserves its portion of the machine’s resources (memory, computing, etc.).

This allows customers using VPS hosting to experience similar capabilities and performance to a dedicated server for their sites.

Note: An operating system (OS) is system software that manages computer hardware, and software resources, and provides standard services for computer programs. It acts as an intermediary between programs and the computer hardware, for example; Microsoft Windows, macOS by Apple Inc, Linux, and Android.

How does VPS hosting work?

VPS web hosting environments work in the same way as a virtualized operating system in the sense that one server will run numerous, one-of-a-kind virtualized OSs on a single server -since each virtualized system behaves as though it is a dedicated server.

A server is a computer on which your web host stores the files and databases needed for your website. Whenever an online visitor wants to access your website, their browser sends a request to your server and it transfers the necessary files through the internet. VPS hosting provides you with a virtual server that simulates a physical server, however, in reality, the machine is shared among several users.

Virtualization is possible through a hypervisor; using virtualization technology, your hosting provider installs a virtual layer on top of the operating system (OS) of the server, this layer divides the server into partitions and allows each user to install their OS and software.

READ ALSO  How To Work Online in Nigeria

This process makes the most effective use of computer resources such as network bandwidth, memory space and processor cycles. For this reason, a hypervisor also goes by the name of a virtual machine monitor (VMM). VPS hosting relies on a hypervisor to take resources from the physical server and provide each website with access to an emulated server (the VM).

These physical servers are often held in a data centre and divided equally between several virtual compartments (known as server virtualization). Each compartment is rented out, and server software is set up on them separately so that each unit is capable of functioning as an independent unit. Every individual VPS is called a container, and the server each container is held in, is known as a node.

Therefore, a virtual private server (VPS) is both virtual and private because you have complete control. It is separated from other server users on the OS level. VPS technology is similar to creating partitions on your computer when you want to run more than one OS (e.g. Windows and Linux) without a reboot.

Running a VPS lets you set up your website within a secure container with guaranteed resources (memory, disk space, CPU cores, etc.) you don’t have to share with other users. With VPS hosting, you have the same root-level access as if you had a dedicated server, but at a much lower cost. Listed below are more benefits of VPS;

The benefits of VPS are usually left as testimonies to its users because its experience often clarifies how it’s unique. Hence, the major pros of VPSs are that they give you the freedom of having your virtual machine just like you would from a more expensive, dedicated server with performance that can allow you to handle moderate traffic with the occasional heavy spike.

Offers the ability to oversee a hosting environment. Also, if you plan to install applications that need you to perform a system restart to finalise the installation, you can do this without affecting anyone else, at any time. Even though you share a VPS server with others, yours can be restarted without disrupting others.

With a VPS Server, you have a predefined amount of RAM available to you whenever you need it. In contrast to shared web hosting, where there could be others sharing your server that could eat up the RAM when you want it most!

Another great thing about VPS is that you can purchase the resources you think you will need, and if that’s insufficient, you can simply increase its size.

Who is VPS hosting for?

VPS is often a great option for SaaS providers, game makers, programmers, companies that have outgrown their shared hosting, and any company that needs a secure and affordable backup environment. VPS hosting is usually chosen by website owners who have medium-level traffic that exceeds the limits of shared hosting plans but still don’t need the resources of a dedicated server.

Technically; think of VPS as a remote computer, thus anything that you can do on a computer can be done with a VPS; this means you will not be limited to just web hosting (although most virtual servers are used to host active websites), but you are also permitted into more adventure.

Hence VPS server is for anybody interested in using it if need be for it in demanding times such as in;

This is its most common and popular use. Since virtual private servers provide more resources for your website (like CPU, RAM, etc.) than shared hosting, you’ll find that your website feels more responsive. Plus, with full control over the virtual server, you can install and remove software as you like rather than being stuck with what the host offers.

If you’re looking more towards professional uses, you could use a VPS for hosting files and other media. Anything that runs as a server can be run on a VPS.

Have you ever thought of running your game server for your favourite multiplayer games? Well VPS can help you to become like a god in such creation, so you can produce your gaming world.

Since dedicated hosting is expensive, virtual servers can be used as testing grounds for server setups that are not ready to go live until they are prepared.

Also known as a seedbox, you can use a virtual server only for torrenting. If you torrent frequently, migrating the effort to a remote VPS not only frees up a lot of home bandwidth but also allows you to torrent 24/7.

It’s cheaper to use cloud-based storage, but if you’re already using a VPS for some other reason and you have leftover space, you might as well think of it as free file storage for documents and important files.

As a business or website grows, it demands extra functions and more resources. When site owners looking to upgrade to a more suitable hosting plan, VPS is the next logical hosting to look into when making the transition from shared hosting. This is because shared hosting is likened to living in an apartment complex where the location and all resources are shared among the residents.

The rising issue with this style of hosting is the available bandwidth and room included, eventually, websites will need something that scales as they grow. Another drawback to shared hosting is that its environment can’t handle traffic spikes very well.

The VPS hosting answers the problems of scalability and limited resources. VPS is divided into numerous virtual cubicles within a server, and every account will get quantities of these allocated sources (a fraction of the server’s CPU, disk space, memory, and bandwidth for example) plus full root access.

You still share the server (building) with other people, but you now have more control over your space, using it as you see fit. VPS is a more powerful setup than shared hosting.

The neat thing about VPS is that it emulates a dedicated hosting environment but with allocated system resources divided between individual sites. The next alternative is the most expensive option; a dedicated server where all of a server’s resources are dedicated to a single user (owning a home).

With dedicated hosting, you have access to an entire physical server. You can host a single website on this server, or use it for multiple properties that you manage. Dedicated hosting provides you with incredible levels of power, performance, storage, and security.

However, dedicated hosting is also the most expensive form of hosting, since you’re not splitting server costs. It also requires a higher level of technical expertise, since you’ll also be responsible for managing your server. VPS is best compared to DS via these categories:

Dedicated hosting is the obvious winner here. You get as many resources as you like, as well as not having to rely on someone else. VPS hosting undoubtedly has its benefits, but it’s no contest when it comes to the number of resources you’re supplied with.

VPS has Adequate performance levels for the majority of websites and it is cheaper than dedicated hosting, but; VPS cannot match dedicated hosting for resources or performance plus you’re still sharing resources, so features may be limited. Dedicated servers have huge resource limits and great performance and it saves you from upgrading to a higher plan should your website grow, but; it has relatively expensive monthly pricing plans and it requires technical knowledge.

While VPS hosting is generally very secure, dedicated hosting offers a higher level of protection. Both types of hosting allow you to install your security software, but with dedicated hosting, you are in full control of any security breaches.

Unsurprisingly, it’s another win for dedicated hosting. Greater resource limits mean your site should be able to deal with huge surges of traffic and still load quickly. VPS hosting offers great loading speeds, but if multiple sites on the server experience spikes in traffic, your site may slow down.

Both VPS hosting and dedicated hosting offer managed and unmanaged plans, and both have adjustable resources which can be amended month-on-month. VPS hosting does have a slight edge, though, in that you can borrow resources from other sites if you exceed your monthly limits.

VPS hosting takes the win here. It acts as a great middle-ground for sites that sit between needing a shared or dedicated hosting plan and can grow with your site until you’re ready to upgrade. Dedicated hosting provides everything you need outright – if your website is ready for it, you’ve already scaled to the summit.

If you’re looking to save money; VPS hosting is cheaper than Dedicated server hosting, and it is as effective as Dedicated Server. 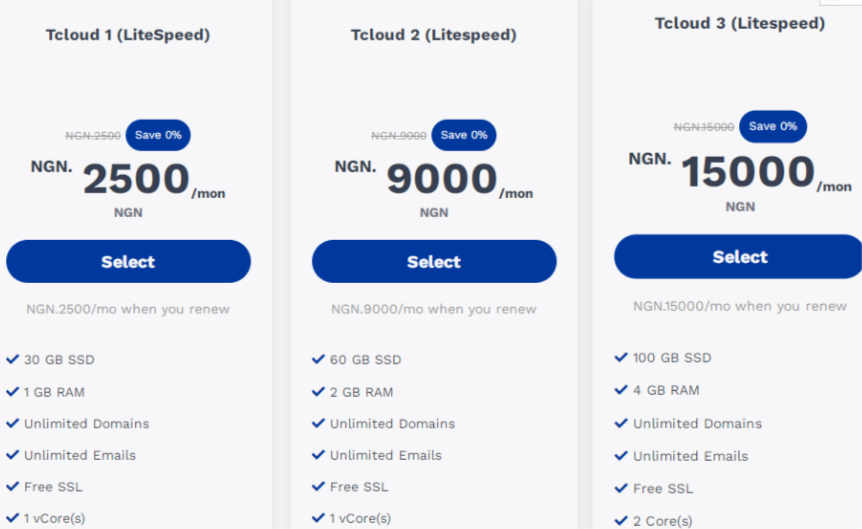 Truehost has VPS services that you can use to host your website conveniently on the internet. The Pricing starts from N2,500 per month to N112500 per month.

The features increase with an increase in price. Check out Truehost VPS hosting here.

Choosing the right Hosting Plan can be overwhelming - this is the plan most people buy here.